In Spanish speaking countries Split bills are much less common than in the English-speaking world.

And there’s always a check dance. It’s goes something like this:

There are a couple of phrases from that exchange you’ll find handy.

Me toca a mi is a very common colloquial way to say it’s my turn,

Yo te invito, literally means “I invite you”, but it’s understood as “it’s on me”

So, if you invite someone to eat be careful how you say it, otherwise you’ll be expected to pay. And if you don’t pay after inviting someone to eat, well in Mexico you’d be an elbow.

I have no idea why, if you know why it’s elbow email me and let me know.

Everywhere else and also in Mexico the word you’ll hear is tacaño.

You know, I picked up a lot of colloquial Spanish like this from day one of my Spanish adventure by reading a comic strip called Condorito.

One of the Characters in Condorito is Máximo Tacaño (Maximum Miser). As you’ll see below he is characteristically tightfisted. 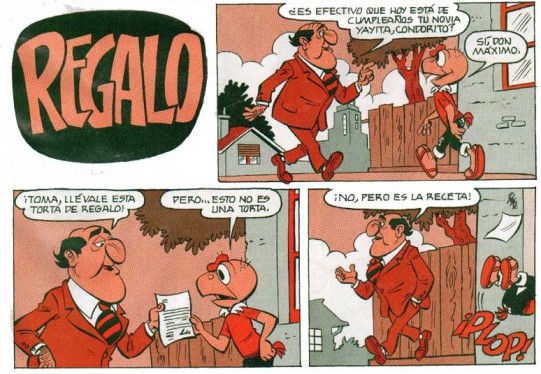 Here’s a translation of “Regalo”.

Second frame:
Máximo: Tocaño: Take, (this) and take it to her it’s a cake (as a) present!
Condorito: But… this isn’t a cake.

Last frame:
Máximo: Tocaño: No, but it is the recipe.

By the way, the further you go with me on your Spanish path the more colloquial language I’ll teach you. That way, as you Spanish advances and you start to use it on the streets, in the markets and at the fiestas the more you’ll fit in with everyday normal Spanish life.

Click here to see the steps to take you from getting by to living the language.

Fun! (How do you say fun in Spanish?

I really enjoyed the comic. I’m a beginner pero Yo understood a few palabras.

I believe in Spain, the term, ‘buitre’ (vulture) is often used to describe a tightfisted person or cheapskate!

Wow! this is great.

Condorito: Maximo, you have long pockets and short arms!

Pure magic, the way you find to keep learning interesting and inviting. Surely the mark of a great professor…………………………………thank you y muchas gracias