One of my students just had a phenomenal time in Mexico’s Copper Canyon.

Here are some insider tips from Vicki for a possible itinerary.

MEXICO – CHIHUAHUA – EL FUERTE, COPPER CANYON TRAIN TOUR
The best time of year to do this trip is either in the second part of February and 1 part of March or in October just after the rains. I understand that in October everything is still green. 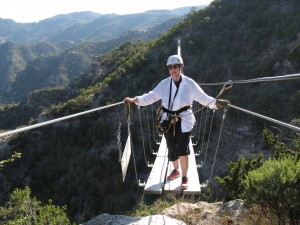 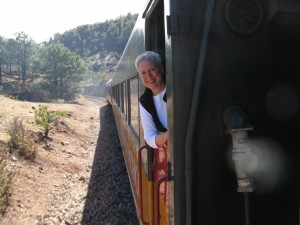 This is what we would do now.

Or another option would be to do as above except after El Fuerte move on to Los Mochis for 2 nights then take the bus to Mazatlan (I understand this is a 6 hour ride) This option would have you fly into Chihuahua and either fly out of Los Mochis to home or out of Mazatlan to home.

Some hotel and other information 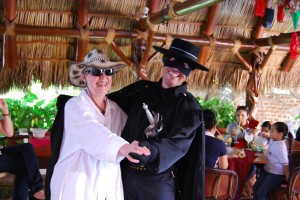 OTHER POSSIBLE HOTEL in El Fuerte
We had supper there and it looked quite nice
You can park your car inside the gate
In 2014 the room rates were around $70. Or 700 Pesos per night
Hotel la Choza, since 1564
www.hotellachoza.com.mx
hotellachoza@prodigy.net.mx
5 de mayo 101, Col. Cento
El Fuerte, Sinaloa, Mexico
Tel/Fax 698-893-1274 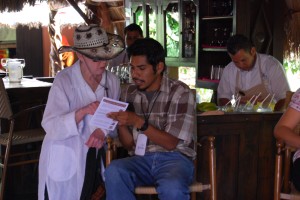 GUIDE IN CHIHUAHUA
!ah, Chihuahua!
Ivan Viezcas Ortiz – Speaks English – is a younger man, knowledgeable
Tel 614-542-1483
Cel 614-142-2069
ivan_viezcas@hotmail.com
Will come out and pick up a party of 4 to Creel for 4000 pesos back to Chihuahua with a side trip to a Menninite farm. This is more or less the same as the 1st class train from Creel to Chihuahua

GUIDE FOR TRIP TO BOTTOM OF CANYON FROM CREEL
Cesar Gonzalez Quintero – Speaks English
Tel 635-456-0108
Cel 635-104-3503
Email: cesargonzalezquintero@gmail.com
We didn’t actually use this guide, but he came highly recommended by a couple who did.
I would give him a call to see about which hotel to stay in in Creel and also to ask about the trip to bottom of canyon with an overnight stay. Which would be best 1 night in Creel with 2 nights at bottom, or 2 nights in Creel with 1 night at the bottom.

Our guides at the various hotels
David at the Mirador Hotel
Martine at the Mison Hotel
Miguel at El Fuerte, he was also Zorro
Ivan – Chihuahua, he is friends with Miguel in El Fuerte