One of my favorite jokes as a 7 year old was from Blanca Nieves y los Siete Enanitos. (Snow White and the Seven Dwarfs.)

The dwarf in the play said, “the stepmother isn’t pretty and she isn’t ugly.” 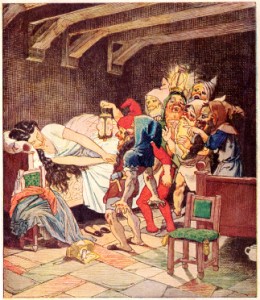 That’s pretty funny when you are 7 years old. I still don’t mind the joke 40 years later.

Spanish has a similar double usage of one of its common words.

You’ll most likely understand this reply:

Estoy bien, gracias. (I am well, thanks.)

But what if your amigo said,

If you translate that literally you end up with, “I am well bad”???

That makes no sense.

Bien most commonly means well but it also means pretty, very or quite.

Here are some more examples in which bien can mean quite/very/pretty.

Voy a llegar bien tarde.
I am going to (arrive) be quite late.

By the way, this is not slang. It’s even in el Diccionario de la Lengua Española de la Real Academia Española. (Spanish Language Dictionary of the Royal Spanish academy.)

Bien is just one of many common Spanish words that have extra meanings. These secondary meanings are so common that Spanish Ear Training Master Classes #2, #3, and #4 are dedicated to that very tema (subject).

Instead click below to find the right path for you to speak Spanish bien pronto (very soon).